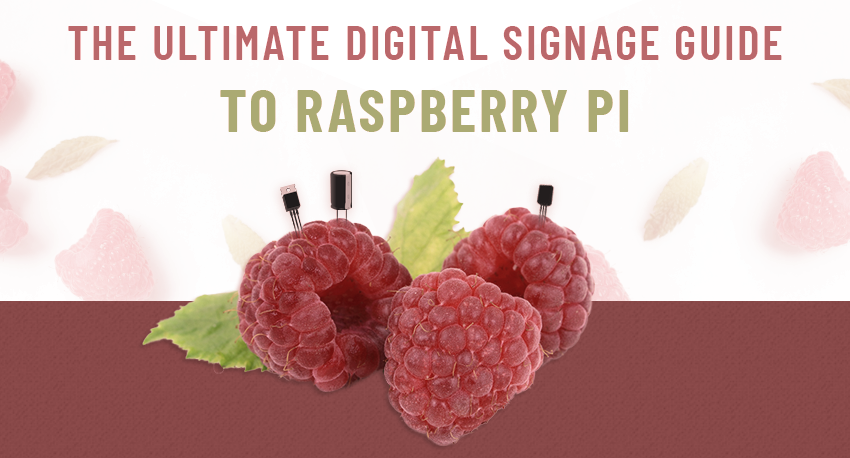 In the world that is moving faster than ever, with technology advancing on almost a daily basis, digital signage has proven to be a great way to get your message across for various purposes. When combined with Raspberry Pi, it gets even better. In this article, you’ll learn everything there is to know about the great combo of digital signage and Raspberry Pi, and find out how you can use it in your own field. We’re sure that this symbiosis has something for almost anyone, and we’ll tell you all about it in the following lines. But first things first…

What is Raspberry Pi?

If you’re already familiar with it, feel free to skip this part. However, if you’re still not updated on the latest technologies, let us introduce you to a great invention called Raspberry Pi.

If you’re already familiar with it, feel free to skip this part. However, if you’re still not updated on the latest technologies, let us introduce you to a great invention called Raspberry Pi.

Well, technically, it already came… a while ago… but you get what we mean. Not only is it small, but it’s also incredibly affordable – its price is around $35. Its original purpose was education – it was made to help young people learn programming. However, thanks to its size and price, it quickly became very interesting to people all over the world, who used it for all kinds of different projects.

It is super easy to use – simply plug in the keyboard, mouse and monitor, and you’re good to go. Also, it is charged through a USB charger. So, it quickly became obvious that digital signage is definitely in this picture as well, and this very versatile combination was born.

Why Use this Combo?

If you’re still not quite sure whether a Raspberry Pi with a digital signage software is a good idea, wait – there’s more. Let’s take a look at some of the great advantages this combination can offer, and go from there…

As previously mentioned, one of the greatest advantages of Raspberry Pi is its price. While the computer itself can be found for around $35, the entire kit with everything you need to use it with digital signage will probably cost you around $60-70. Not bad for small business, or big ones that know the value of digital signage, and want to try something far less expensive than the usual deal.

Respectable Performance In A Small Package

While it can really fit in the palm of your hand, it offers an amazing performance. ARM Caster HD, for instance, is not only packed with some great, cutting-edge components, allowing for a super easy setup and excellent functionality. Its performance is around 10 times better than the previous version. Equipped with a1.2GHz 64-bit quad core ARM Cortex-A53 CP, it won’t let you down when it comes to the speed of connection, or performance of the device itself.

As we already mentioned above, you really don’t have to worry about file types at all. Whatever it is that you want to display, whether it’s mp4, jpg or pptx – you’re covered. Just create the best and most engaging content possible, and leave the rest to your new best friend. It is really that easy!

If you’re thinking that there’s no way it is that great, well, there are some downsides you should consider.

At this point, there is no way to increase the RAM of Raspberry Pi above 1GB… Also, the microSD cards are limiting when it comes to storage. However, technology is advancing really quickly these days, so there’s a huge chance this will change soon, too.

There have been reports by users of Pi lags when trying to display pages with Java-heavy data. Also, sometimes it is hard for the device to play video, too. That, of course, depends on the device itself, as well as your expectations.

If you’re not that tech-savvy and you had a hard time setting it all up, it is possible that using Raspberry Pi is going to be too much for you. It might take a lot of time to get used to it. However, it is possible, and practice makes perfect.

This depends on the software, but it could happen that you have to manually update each device, which is not that much fun.

Again, this depends on the platform you use – but there could be a problem with your Pi because there are no native security features in it. This only means that you need a platform that offers its own solution to this problem. It is, however, important to mention that many of these downsides can be avoided by choosing a good player for your Raspberry Pi powered digital signage.

It is really easy to set up the digital signage software for Raspberry Pi. Just install the UCVIew player software (which can run on every Raspberry Pi model), create your content and choose where you want to display it. Alternatively, if you don’t own a Raspberry Pi, you can get a variety of UCView preconfigured Raspberry Pi ARM Caster models, including Raspberry Pi Zero & Raspberry Pi 3. It’s a piece of cake, just plug it in and you’re ready to go.

This little fellow has a lot to offer for its size: 512MB RAM, an HDMI output, Bluetooth 4.1, Micro SD card slot, and newly added four USB ports for easy setup and connection. It will work on both ARM and Linux OS, and has a one-year warranty. You can use any media type on it, whether it’s a PowerPoint presentation or HTML content – and anything in between. ARM Caster also includes over 120 free apps, allowing you to make your signage content as interesting and engaging as possible. It will also allow you to schedule, and update, your content from anywhere – and it is as big as your credit card.

To make the most of it, follow the simple guidelines:

When it comes to media formats, we weren’t kidding. These are supported:

For more information about ARM Caster HD specs, feel free to refer to this PDF.

Who Can Use Raspberry Pi Signage?

Raspberry Pi Signage is probably the best option for small businesses ready to go digital, but still not ready to spend too much money on it. It’s good for restaurants, schools, retail, event management, and basically anything you can think of. As an entry-level solution, it provides a bunch of options for those ready to play around with it and learn how to use it, and it will definitely not disappoint. There are limitations to it (still) but use it carefully and you’ll be good to go.

What We Can Expect In The Future

We all know that technology is advancing at amazing speeds nowadays, so what’s next when it comes to Raspberry Pi? It’s been two years since Raspberry Pi 3 has been released, so when can we expect it? When the last model came out in 2016, its creators stated that it is “a three-year product”. That could mean that this time next year, we’ll have Raspberry Pi 4. However, we know next to nothing about it. The developers haven’t told us much, but it has been announced that Google will be assisting in bringing AI to Raspberry Pi, which is definitely something to look forward to. There have been speculations of increased RAM, an upgraded processor, and USB 3.0 ports… but that’s all they are – speculations. People have also been wondering about the price of this long-expected upgrade to the palm-sized computers, and the only thing that is certain is that we all hope it will stay in the super-affordable price range. So, we will all just have to wait and see.

If you want an affordable, yet effective way to achieve maximum effects, look no further than Raspberry Pi powered digital signage. Its benefits are numerous and it will provide you with real value that every small (and big) business can take advantage of. It is so easy to set up, yet so packed with awesome options to play with, easy to master and easier to carry around, and all that for an amazingly low price. Raspberry Pi is definitely the product of our present, and our future. With its updates, its collaboration with digital signage will grow as well, and it is only a question of time before new features and enhanced options are presented to all of us. Make sure not to miss out on them!